Reading Gone With The Wind one last time 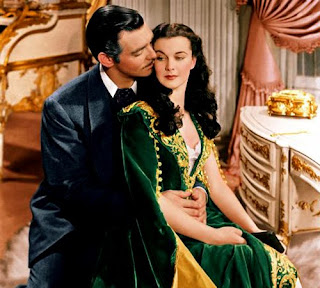 When I was a kid I used to read Gone with The Wind every summer. I started it in June and finished in August or even September. Each day I would read a few pages and then go about my business. I would read it while eating or just about anytime I was doing nothing. The book was usually left open to the last page on my dresser like a Bible. Gone with The Wind was a big book in my family. We were from Virginia and my grandmother and great grandmother would take us to the movie like other people went to Disney World.

I can't really say what the attraction was except that GWTW had become like an old friend you saw every summer. I knew all the scenes by heart. I knew Mammy's lines as she scolded Scarlett about not asking the gentlemen to dinner. I would revisit the siege of Atlanta with Scarlett trying to get Melanie to have that baby before the Yankees arrived. I would become Rhett Butler as he moved about the Wilkes barbecue being the smart guy and lampooning Southern arrogance. Of course I was Rhett as he tried for Scarlett through the entire novel.

And as the summer progressed so did the novel. Soon we were in the early days of August and Scarlett and Melanie were barely surviving at Tara after the Yankees had left and Scarlett was trying to come up with the money for taxes, marrying Frank Kennedy to get him to pay. Finally school was looming again and I accelerated my reading, rushing through Scarlett and Rhett's final breakup and of course Scarlett's determination to get Rhett back at the end with those two final lines, "frankly my dear I don't give a damn" and "after all tomorrow is another day."

I recently picked up GWTW and tried to read it again. It read like an old romance novel and I couldn't really stay with it. The same way I can't watch the movie anymore. There seems to be something missing. Maybe it is the summers of my youth where the heat slowed time and  you allowed yourself to suspend disbelief and slip into another world ...I guess it is gone, gone with the wind.

http://www.billhazelgrove.com/
Posted by William Hazelgrove at 8:44 AM