The two fairs were forty years apart. The fair made famous by Eric Larson's book Devil in the White City was to show that Chicago had arrived and was a world city like Paris or New York. Daniel Burnham and his architects had this in mind when they designed the neo classical buildings of the White City. It was a celebration of culture in a city that was the slaughter house for the world. The Ferris Wheel made its debut along with Cracker Jacks and the first Hootchie Koo dance. People came away from the fair amazed that such a world existed in the rough and tumble coal burning city that at times smelled so bad people would not go out doors.

The 1933 fair was entirely different. Officially it was to celebrate the incorporation of Chicago but that didn't seem enough so it was changed to A Century of Progress. Technology and industrial might became the themes in a fair held in the worst year of the Great Depression. The fair quickly became a quest against the naysayers who pointed out that Chicago was broke and nobody would come during a Depression where a third of the banks had failed and a quarter of the work force was unemployed. The fair would be built on gold notes and corporate funds. No public funds would be used.

The Ferris Wheel became the Sky Ride, a cable car that went over the lake to Northerly Island 625 feet up. For people who had never been in a plane this was amazing. Television and long distance phone calls made their debut. An unknown young girl named Judy Garland sang and another unknown named Sally Rand danced behind two ostrich feathers. It was not white but multi colored earning it the name The Rainbow City.  It was the first disposal fair and was torn down a year and a half later.

People could watch peas get canned and cars get built. There was no Dr. Holmes but there was Al Capone. How Chicago got rid of Al Capone is a whole another story. President Roosevelt asked that the fair stay open an extra year. It was the only bright spot in a very dark world. 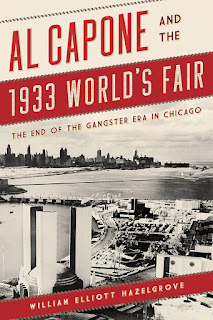 Posted by William Hazelgrove at 7:21 AM