The Myth of Elliott Ness and the Untouchables

It was a good movie.  Kostner as Elliott Ness was perfect and his wife was beautiful. She would later pop up on House of Cards as a power player but no one can forget the closeups between her and Kostner. He was the honest man in a world of vice and corruption. Sean Connery was the cop seeking redemption who helped him. Of course Deniro was Capone. Mamet wrote the script and The Untouchables played out as the way Al Capone was convicted. Except none of it was true.

A sports writer named Oscar Fraley cooked up the whole thing with a down on his luck alcoholic named Elliott Ness. Ness had been a prohibition agent and had written a twenty page memoir that Fraley took and then changed for a bestselling book that sold 1.5 million copies. He then sold it to television for a series with Robert Stack. And then of course it was sold to Hollywood where it was immortalized for all time. But again, it wasn't true.

Fraley came up with the whole concept of the Untouchables; a group of incorruptible cops and investigators who would get Capone. Ness had died before the book was even published and that left Fraley as the only guy who could set the record straight and he wasn't talking. Writers bend the truth to make a story good. That's what we do. The sports writer got a lot of mileage out of the twenty page dogeared manuscript Ness had given him. The real story is how the Secret Six got Al Capone but no has told that one...yet.

Al Capone and the 1933 Worlds Series 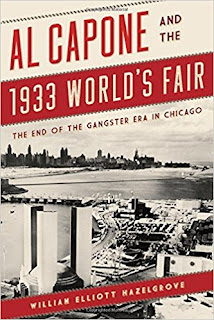 Posted by William Hazelgrove at 7:54 AM