Teddy Roosevelt Faces Down a Gun Slinger in the Wild West

He was out looking for horses and it was getting dark. Teddy Roosevelt saw a town in the distance, small yellow lights peeking out in the Badlands. He went into town and looked for a room to bed down for the night. When he walked into a saloon he heard shots and saw a man with two pistols shooting up the bar. Teddy went and sat behind a wood stove to warm himself when the gunman saw him. What did he see? A man in a sombrero in a buckskin coat with thick glasses. A dude from the East. A target

Four eyes is going to buy the man bellowed. Teddy rubbed his hands and kept his head down. The man staggered over looking down at the skinny man behind the stove. I said four eyes is going to buy he shouted waving his guns. Teddy breathed deeply. Well if I have to I have to he said, standing up. Teddy cold cocked the man with a right hook and then a left. The gunman fell to the ground and Roosevelt sprung on him but he was out.

The people from the saloon hustled the man out and put him on a night train out of town. Teddy got his room and enjoyed the thanks of the town people. The dude from the East had just knocked out a badman and his reputation went a little higher that night. The Wild West had begun forging the man who would be President one day. 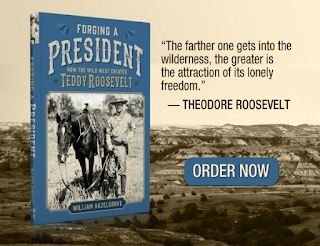 Posted by William Hazelgrove at 7:17 AM